Two weeks before the senseless tragedy in Nice, France, we were enjoying the Promenade for three days before our ship set sail for a Mediterranean cruise.  You may recognize these locations from our hotel window as the same ones you viewed on your TV news: 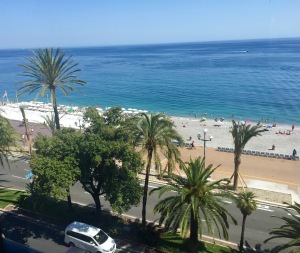 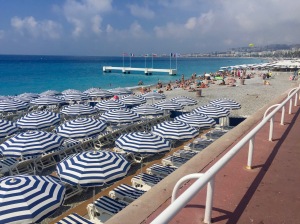 I still think about all the wonderful people we met there, some whose names I do not know, and pray that they are all survivors.  Nannette, Bill, Rick, and I purchased paintings from an artist in Old Town, met lovely souls in restaurants, wineries, and our hotel.  I also took time to search out Toto, a fabric store near our hotel, at 14-16 Rue Malaussena.  Brightly colored fabric I can use next season.  Large store and lovely people.

Since we were on a wine cruise, our group enjoyed an excursion to the Chateau de Cremat, about 30 minutes from Nice.  Coco Chanel visited the estate many times in the 1920’s, a guest of a prominent  American socialite hosting lavish parties for the jet set.  As a result of their friendship, he gifted the logo of the two interlocking C’s which is seen throughout the estate, and now belongs exclusively to Chanel. 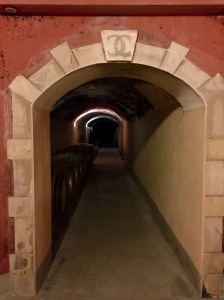 After our three days in Nice, we were transported to Monte Carlo.  Yes, we visited the lavish Casino, and all I could think of was, “Daniel Craig stood on this very balcony.” 🙂  Eye candy everywhere, luxurious yachts, stunning surroundings, and home of the Grand Prix. 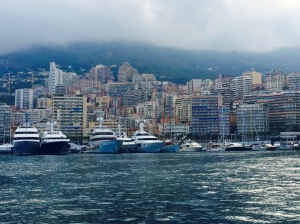 We boarded our Oceania ship, the Riviera, and woke the next morning docked in France.  A private guide (who was absolutely amazing) met us and we drove to Arles.  Arles is in Provence, where Van Gogh stayed for a few years prolifically painting.  Gauguin joined him, and the two got along famously at first, painting by day and frequenting the bars and brothels at night.  Until an evening a few months later, when the two were having drinks at the cafe, and Van Gogh threw his glass of absinthe (a 68% alcohol liqueur banned in most countries now) at Gauguin.  As Gauguin walked away, Vincent chased him brandishing a razor and Gauguin left town.  You guessed it–this was the night Van Gogh later cut off his own ear and delivered it to Rachel at the brothel, saying, “Treasure this precious object.” 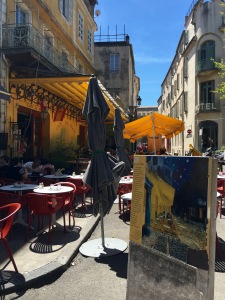 The Cafe, in the Forum Square, is one of many stops on the Van Gogh trail, where they’ve placed reproductions of his canvases at the very sights where he painted.  A highlight of my trip, standing on that spot and feeling those artistic vibrations. 🙂

Arles is also home to Roman ruins (which we also saw in Spain.)  Seen here, a Roman classical theatre, which is still used for productions today.

The Roman Arena, or Amphitheatre, held gladiators fighting wild animals, and today they still hold “bullgames” here.  I was happy to know that only twice a year is the bull allowed to be killed, but that’s twice too many for me…

We enjoyed lunch at a typical French cafe, then proceeded to Aix-en-Provence to visit Paul Cezanne’s studio.

Much the way he left it, preserved as it was when he died. 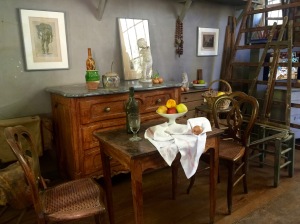 What an honor to be strolling around in his actual studio.  I wish I had a better photograph of his Wall of Windows.

And the letter he wrote to Monet, apologizing for leaving Paris so quickly, and thanking him for his support. 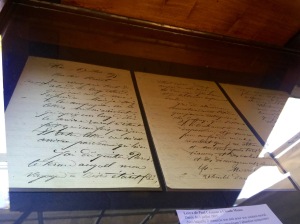 The following day, our ship arrived in Corsica, France, birthplace of Napoleon.

A very beautiful island, apparently a filming location for The Longest Day.

In the afternoon we attended a wine seminar aboard the ship.  This was a Schramsberg Wine sponsored tour. 🙂  Mmm, yes, sparkling wine is their specialty…  My favorite!  The ship sailed at night and every day we awoke in a different location.  So it was on to Sardinia…

We experienced a segway tour the following day in Cagliari, Sardinia, Italy.  Segwaying is a great way to sightsee.  Smoothly sailing along, while your tour guide offers history through a headset.

Then it was back to the ship for another wine seminar.  Oh, yeah!

More wine the following day, as we docked in the port of Palma de Mallorca. 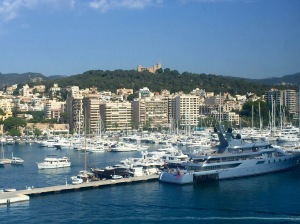 And traveled to two wineries.  The first was Bodegas Ribas, established in 1711, where we met the owner, who led our tour and tastings.  Later we indulged in a special alfresco wine-paired lunch in the beautiful hacienda courtyard. 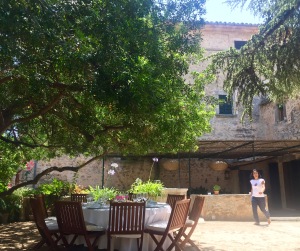 Traveling on to the Mesquida Mora Winery, we met Barbara Mesquida, a fourth generation winemaker.  After eight years of partnering with her brother, she struck out on her own to establish this winery where she is 100% committed to “natural” wine without added sulfites.  You know, in addition to being organic, this process greatly helps to eliminate headaches and hangovers. Just sayin’…

Presenting Barbara with a Schramsberg wine.

Our next excursion was a tour of Ibiza, Spain, beginning with the salt flats in Las Salinas, and then on to the enchanting town of San Jose. 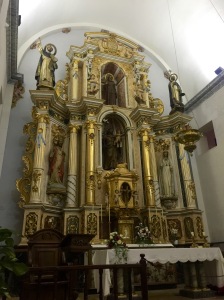 San Antonio was next, which featured a yacht-laden harbor, many boutiques, and a beautiful palm-lined promenade.

Arriving in San Miguel, we savored a delightful lunch of paella at Jardin del Mar. 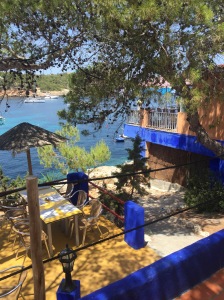 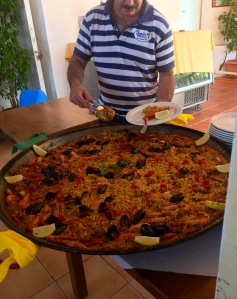 We strolled through Santa Eulalia, a picturesque cultural center and resort area.

You wouldn’t believe the Las Boas Building, apartments by Architect Jean Nouvel.  They have arranged rainbow-inspired colored balconies of flowers.

And finally, leaving Ibiza was almost as scenic as arriving.

Our last full day in Spain was spent in Valencia where we explored the restored Central Market.  The market is bathed in natural light from glass domes and colorful window panels. 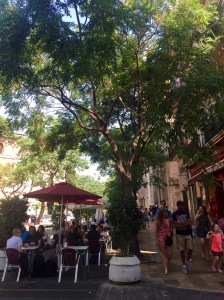 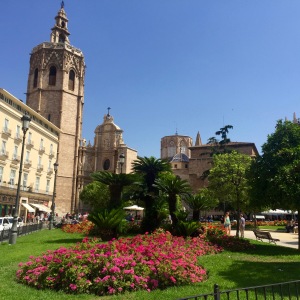 Constructed in 1238, St. Mary’s Cathedral or Valenica Cathedral, is awe inspiring.  One of those “you have to see it to believe it.” 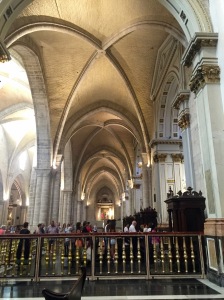 But the piece de resistance:

Most Christian historians the world over declare that all evidence points to this Valencian chalice as the most likely candidate for being the authentic cup used at the Last Supper–it has been defended as the true Holy Grail!

What a way to complete our journey!  And back to the ship, it was a wine-paired farewell dinner.  You’re probably wondering how I even remember these details with so much wine.  I take notes. 🙂  My all-time favorite trip, and we are looking forward to the next Schramsberg Cruise!

Safe Summer Travels to All!

One's vision is not a road map but a compass.

I want to be rich. Rich in love, rich in health, rich in laughter, rich in adventure and rich in knowledge. You?

This is my blessed life. Family. Sewing. Travel. A simple blog by a sewing convert.

--Think Outside the Stitch--

A girl, a sewing machine, a journey!

Refashioning a Method to the Madness of Life

A housewife who loves to craft and loves her cats! ❤